I've decided a great way to get back into blogging would be to show some of the great seismograms the UNH seismometer has been recording since we set it up in 2011.

While most of the signals we record on the station are from passing trains, we have also recorded some pretty impressive earthquakes.

Check out this seismogram from an earthquake swarm near the Solomon Islands on Feb. 8, 2013. In a little over 40 minutes, there were 3 large earthquakes. A magnitude 8.0 struck at 1:12 (UTC), followed by a 7.1 event 11 minutes later, and a 7.0 event 30 minutes after that. In addition, there were smaller magnitude 5's and 6's both preceding and succeeding these larger events. When the surface waves from the 7.0 event hit our station, surface waves from the preceding 7.1 and 8.0 event were already shaking it. In the image below, the signal is so strong that it actually goes off the page! 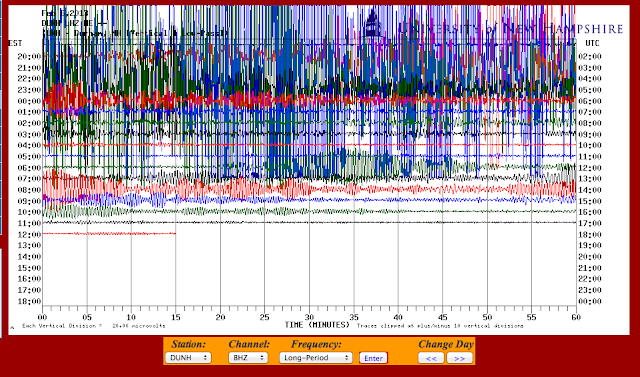 Remember the Colorado and Virginia earthquakes that occurred back in August of 2011? The UNH
seismometer captured those earthquakes as well: 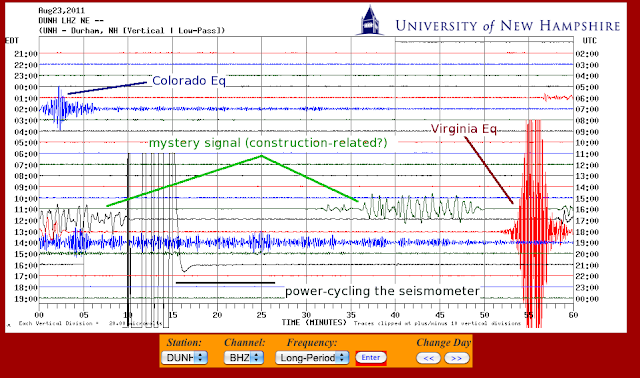 While we are looking at more local events, let's not forget the small Maine event (magnitude 4.0) that occurred on Oct. 16 of last year. See that impuse response in green at the bottom of the chart in the image below? Well, that's it. The earthquake occurred very close to our station, so the P, S, and surface waves hit at nearly the same time. The response that we see in the long-period signal, therefore, is very sharp. I have to admit, I was quite excited when this earthquake occurred. This was the first earthquake that I really felt and realized what it was while it was occurring -- well, truth be told I first thought my furnace was about to explode, but only for the first second or two. In fact, I not only felt the earthquake, but I heard it. I actually heard the earth rumble. 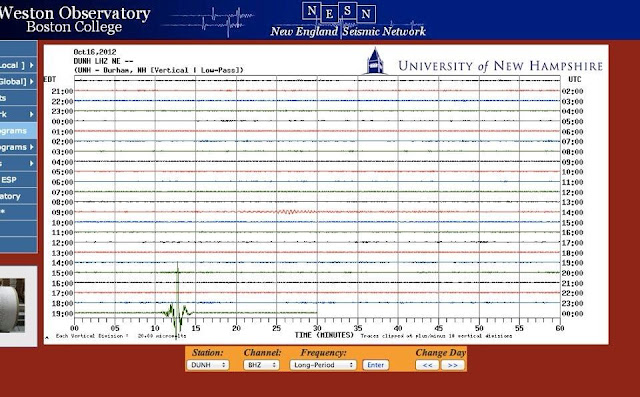 Finally, let's look at a seismogram from a magnitude 6.9 earthquake that occurred on Feb. 02, 2013 in Japan. This is a great seismogram because we can clearly see when the P, S, and surface waves arrive at the station. 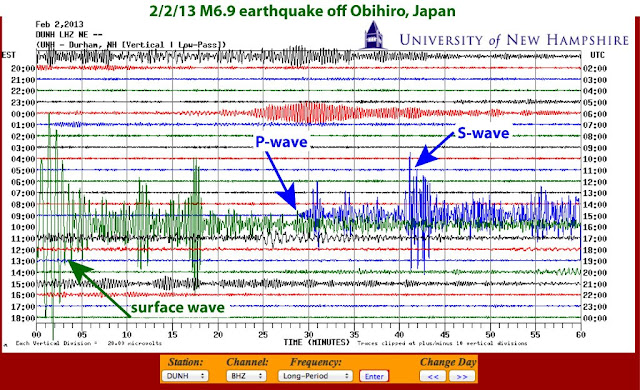 Pretty cool, eh? If you want to check out some seismograms for yourself, you can do so at the New England Seismic Network webpage. To view the UNH stations, click on current seismograms and select DUNH as the station.