A Special Sensor Microwave Imager (SSM/I) ( a microwave satellite radiometer) image of sea ice concentrations in the Arctic gridded (resolution is 12 km). Healy is represented by the ship icon in the center of the image. Looks like we are going to be doing a lot of breaking starting tonight!

(this image appears cut off when I view the blog, but if you click on it you can see the full image)

Just about 30 minutes ago we felt the first real shudders as the Healy broke through some pretty impressive chunks of ice. I must admit that sitting through the last 5 minutes of the science lecture was pretty hard as all I could think about was grabbing my camera and running outside! I eventually made it out, and here are some of the shots I snapped: 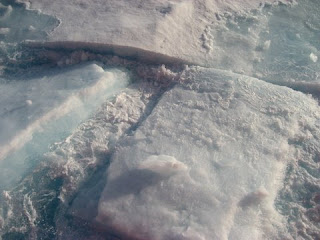 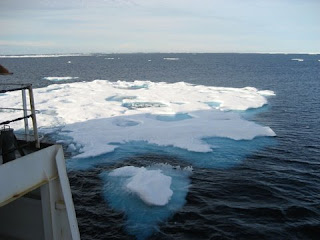 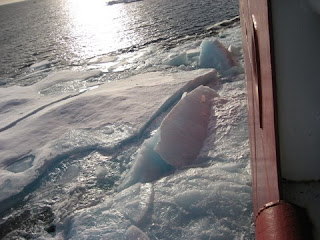 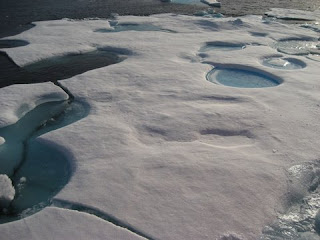 Posted by Monica at 9:21 PM No comments: Links to this post

Some pictures from the Arctic

Here are some pictures to give you an idea of what it's like up here in Arctic!


all ready for my helo ride! 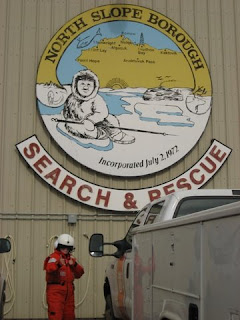 a view from the helicopter as we make our approach 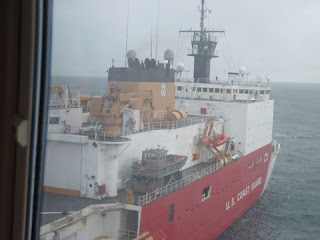 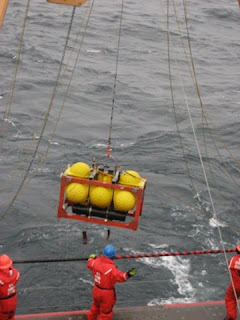 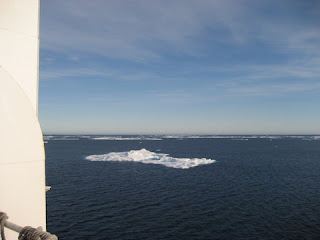 Posted by Monica at 5:55 PM No comments: Links to this post

Track Healy Through the Arctic!

You can track Healy's position as she makes her way across the Arctic by clicking here. It takes a while for it to update our position (looks like about every 9 hours or so) but it will still give a general locale.

We are definitely getting closer to the ice shelf. About 30 minutes ago we passed some pretty big chunks of ice just floating along. In a few hours we should be passing a 30-mile long ice flow that will hopefully (fingers crossed) be full of polar bears!

The ship had Alaskan king crab legs for lunch today. Right now the smell of freshly baked cookies is wafting through the science lounge. I gotta tell you, food-wise I think that the Healy just beat out every other ship I have ever been on!
Posted by Monica at 5:32 PM No comments: Links to this post

Greetings from the USCGC Healy!
The Arctic expedition (see Marcy, I can spell it. I just tend to type way too fast :) ) has officially begun! Our internet is spotty, so I am not sure how often I will be able to update the blog or post pictures, but I will try to when I can.

We embarked the Healy a day early (yesterday) and are now headed North. The helicopter ride out to the ship was pretty amazing, and I saw some spectacular views of the Barrow coastline.

The staterooms are relatively nice actually. The are big enough for three people, but there are only two scientists to a room. I think this is actually the first time on a ship where my room is above the water line. Talk about moving up the ladder!

Today we recovered the two HARP (High frequency Acoustic Recording Package) buoys that were deployed during the Healy Arctic mapping cruise last year. These buoys record ocean noise to determine normal background levels as well as the amount of noise produced by the ship and the sonars. As of now, it is believed that our sonars do not harm the marine life (mainly whales) because they operate at too high of a frequency. If it is determined, however, that they do cause a disturbance, then future mapping operations might have to be curtailed. The research is risky to the mapping operations, but crucial. Right now there are groups that would like to see the sonar work shut down due to the possibility of disturbing the whales and affecting their migration. This research, being conducted by a graduate student from Scripps Institute of Oceanography, will help put this issue to rest, one way or another.

Our mapping operations are commencing this evening. Right now we are currently deploying a CTD (conductivity, temperature, depth) cast to get an accurate sound velocity profile prior to our multibeam patch test. The water depth is approximately 3700 m, so the cast will probably take around 3 hours!

The Healy crew just had an Arctic Circle crossing ceremony last week. This means that those of us that just got on will not get a chance to meet King Neptune and be promoted from "blue noses" (what you are called prior to crossing) to "polar bears". Of course, this also means that I will not have to suck a cherry out of the naval of a greased up fat man, so that is a silver lining...
No initiation means no certificate of crossing, so I guess I will just have to come back to the Healy again another time. We crossed the Arctic Circle on the plane anyway, so really it would not have been a "true" crossing.

Hopefully in a couple days I will be able to report on the extent of the ice and some polar bear sightings! Earlier scientific reports that the Arctic might actually be ice-free this summer have so far proved to be wrong. We saw some pretty nice chunks yesterday and satellite data indicates that we should hit the full ice pack when we reach about 76 degrees North!
Posted by Monica at 9:37 PM No comments: Links to this post

The Arctic cruise made Reuters:

I fly out tomorrow morning to head for Barrow. In 24 hours I will be north of the Arctic Circle!
Posted by Monica at 10:13 PM No comments: Links to this post

Sunset from a Boeing 757 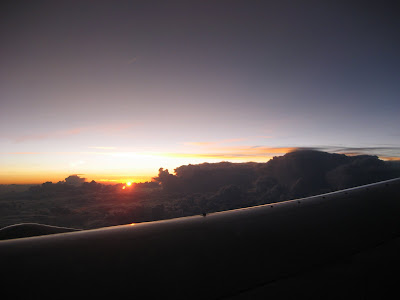 Posted by Monica at 6:46 PM No comments: Links to this post

Who Owns the Arctic?

You mean dropping a flag from a mini-sub does not give you exclusive rights?!?

Who Owns the Arctic?

Thanks to Kurt for sending me this link. Very apropos considering I am Arctic-bound myself in a week to participate in a mapping expedition for the US.
Posted by Monica at 11:37 PM No comments: Links to this post

Thanks to my dad for sending me this article.

It's nice to see that seafloor characterization is starting to make the news, especially considering that is going to be the focus of my Ph.D.

Scientists from two universities team up to map marine habitats in S.D. Bay