Sqlite-manager is a tool that originated as a Mozilla (Thunderbird, Lightening, FireFox) plug-in for managing SQLite databases. However, over at the Kiveo website blog, I found instructions for making this plug-in a stand-alone application.

I followed the directions exactly as posted (note though, that the current version of the sqlitemanager-xr packageis now 0.5.16) and it works perfectly.

I followed the directions exactly as posted (note though, that the current version of the sqlitemanager-xr packageis now 0.5.16) and it works perfectly.

Here at CCOM, we have been testing a small radar for use as an accurate tide gauge out in the field. The WaterLog Series radar has an accuracy of +/- 3mm and and typical report time of 800 milliseconds, which is pretty snazzy. 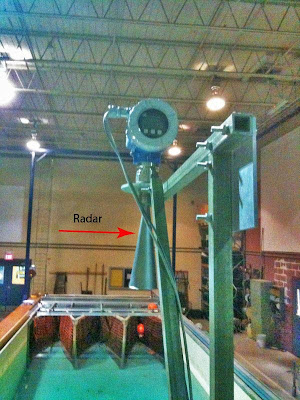 (Radar mounted above CCOM's wave tank)
I was thinking it would be pretty sweet if we could mount one of these radars on the sonar mount of the R/V Coastal Surveyor, CCOM's main survey ship. Right now we have to take draft measurements by holding a yard stick up to a clear tube and measuring the distance between the meniscus of the water in the tube and the top of the Inertial Motion Unit (IMU). This leaves A LOT of room for human error. 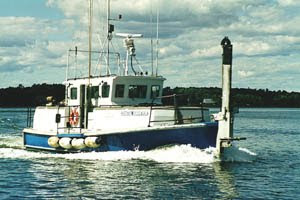 (R/V Coastal Surveyor, with the hydraulic ram out of the water)
On the Surveyor, sonars are mounted to the bottom of a hydraulic ram that moves up and down. Every morning prior to surveying, surveyors measure the height of the ram above a specific point on the deck of the ship. This is then used to calculate the depth of the sonar below the IMU since you know the total length of the ram, and you know the height of the IMU in relation to the point on the deck that you measure the ram height to. This means, each day, we would also know the height of the radar in reference to the sonar as well. We could simply take a running average of say, a minute of data, and get a much more accurate draft than we could ever measure with a yard stick. Furthermore, we could get continuous draft measurements throughout the day, which is something you cannot readily do now, barring someone taking several yard sticks measurements in a row and hoping that the average somehow actually represents the real draft. Plus, trying to measure a meniscus in a tube with a yard stick, on a small moving vessel that is rocking in waves is not something I particularly want to do.
Posted by Monica at 7:06 AM No comments: Links to this post

Typo perhaps not Google's after all...

So yesterday I posted about how I had found a typo in the name of a fracture zone in Google Earth's Ocean layer.
The Vernadsky fracture zone (~ 7º10'43" N and 34º35'05"W) is spelled "Vernadskiy" in Google Earth.
The IHO-IOC GEBCO Gazetteer of Undersea Feature Names (2009) lists the spelling as Vernadsky, and I took this as gospel, since this document tends to be to go-to document to check the name of any feature on the seafloor.
The feature is named after the very famous Russian geochemist Vladimir I. Vernadsky, considered one of the founders of geochemistry. I did a search and actually found several references to him using both spellings, including this one:
Vernadksiy Tavricheskiy National University in the Ukraine. Now I would imagine that if they are going to name a university after someone, they make sure to spell the name right.
So perhaps the misspelling is in the actual Gazetteer and not Google. This guy is pretty famous, he is considered one of the founders of geochemistry, so you would think this would be easier to sort out.
I suppose it could be due to the westernized spelling of an eastern name, in which case, the eastern spelling (Vernadskiy) should be the correct one.
Hmmm...
Posted by Monica at 7:33 AM No comments: Links to this post

Email ThisBlogThis!Share to TwitterShare to FacebookShare to Pinterest
Labels: GoogleEarth

I was flying through Google Earth earlier looking at some oceanic transform faults when I came across something that gave me pause: a typo. I never really expected to see a typo in Google Earth. I posted it to their user help forum, but I am not sure if the right people will see it.

The misspelled feature is a fracture zone in the Google Earth ocean layer. The Vernadsky Fracture Zone (~ 7º10'43" N and 34º35'05"W, named after the very famous Russian geochemist Vladimir I. Vernadsky) is spelled "Vernadskiy" in Google Earth.

I checked the IHO-IOC GEBCO Gazetteer of Undersea Feature Names (2009) just to be sure, and it lists the correct spelling.

Here's a picture of the offending fracture zone:

Posted by Monica at 2:40 PM No comments: Links to this post

Email ThisBlogThis!Share to TwitterShare to FacebookShare to Pinterest
Labels: GoogleEarth

A friend pointed me tool a great little tool that helps you lock down your Facebook and make your personal information more secure. ReclaimPrivacy.org has developed a scanner tool that will check your privacy settings and show you all your vulnerabilities. Best of all, it works on any browser and on any system. Simply drag their tool to your toolbar to make a bookmark (or bookmark using the menu options in your browser), navigate over to Facebook, and then click on the "Scan for Privacy" bookmark link. Below is an example of the result:

Posted by Monica at 5:49 AM No comments: Links to this post

Google Maps of the Oil Spill

Google is tracking the oil spill in the Gulf of Mexico. Check out this weblink to their map as well as some KML files for Google Earth 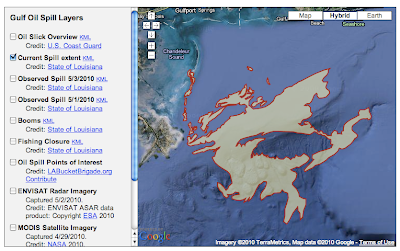 Posted by Monica at 8:17 AM No comments: Links to this post