This past Sunday through Wednesday I attended the Modeling Collaboratory for Subduction (MCS) Research Coordination Network (RCN) (https://www.sz4dmcs.org/) Megathrust Modeling Workshop held at the University of Oregon in Eugene. A megathrust is a very large thrust faults, such as those found along subduction zones, and they are capable of producing very large, devastating earthquakes and tsunamis, such as the 2011 Tohoku-oki earthquake and tsunami in Japan.

The first thing that struck me upon landing in Portland, and then again in Eugene, is how green and lush everything is. You can smell it in the air. I think I’ve acclimated to California, which is brown a good portion of the year, and I’d sadly forgotten how lush other places can be. Flying into Portland I could sand waves in the Columbia River and Mt Hood off in the distance. 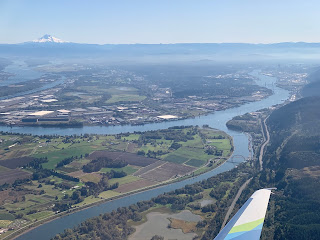 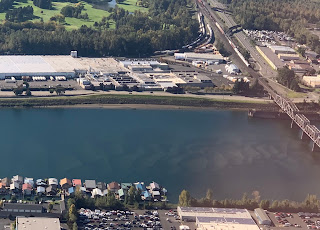 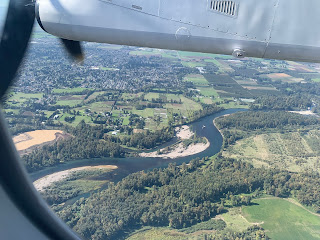 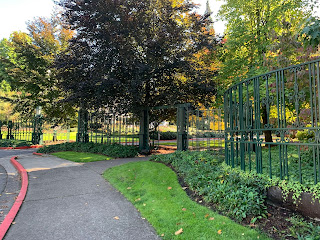 While at the workshop, they mentioned a few times how we were discussing subduction zone modeling while sitting atop the Cascadia subduction zone, arguably the greatest geologic threat to the northwestern US.

Much of the first day was talking about different types of slip along the megathrust, from various types of aseismic slip to devastating earthquakes. Aseismic slip is slip that doesn’t register on seismometers. Examples include earthquakes that are too small and don’t radiant enough energy, low-frequency tremor, and my current favorite: slow slip events, or silent earthquakes. Slow slip events can last hours to months (the longest ones observed have lasted ~1.5 years). The rupture is very slow, but above the normal plate motion rate. The amount of slip accommodated over the duration of these events can be quite large, equivalent to a magnitude 7 earthquake.

The workshop then got into dynamic slip and tsunami modeling. Dynamic slip modeling involves modeling co-seismic slip (slip along the plate boundary during an earthquake) to learn more about the rupture process, earthquake source parameters, and fault properties. Tsunami modeling uses outputs from dynamic rupture models (the amount of slip and surface deformation) to determine the size, energy, and inundation that might occur during an earthquake-triggered tsunami. There is currently a big effort to couple these models together, so that the tsunami models are informed as the modeled slip during the earthquake is occurring, rather than waiting for the net result. It is not just the total amount of slip and deformation that matters for a tsunami, a lot can depend on where and how the slip develops.

Finally, we got into geodynamic and surface process modeling. This is the type of modeling I’m most interested in at the moment. How does the geometry of the megathrust affect fault behavior and earthquake slip? We know the dip of the subducting plate is very important to the amount of friction along the plate boundary interface and the size of the locked portion of the fault. The locked portion is the part of the fault that is assumed to slip in large, devastating earthquakes. How does the topography and surface roughness of the plate boundary interface affect the structural development of the fault? While dynamic slip modeling is interested in the few second to minutes of fault slip and deformation that occurs during the earthquakes, or just after and before the earthquakes (pre- and post-slip), geodynamical modeling is typically interested in plate boundary slip and deformation that happens over geological time scales of thousands to millions of years. However, these models can be used to inform each other, and the work should not be done in isolation. This was one of the motivating factors of the workshop. To better understand subduction zone processes, we need to facilitate collaboration between all the different groups doing subduction zone research.

There was a previous workshop earlier this year that focused on fluid transport through subduction zones, and there will be a final workshop next year on modeling volcanic systems. The presentations and breakout session notes (where key questions related to fluid transport were posed to the attendees) for the fluid transport workshop are already online, and the white paper summary of the meeting is coming soon. The same materials will also be available for the megathrust modeling workshop, and eventually for the future volcanic systems modeling workshop. The idea of the MCS RCN to be as open and transparent as possible so that these discussions benefit the community at large. These workshops are meant to generate a consensus in the subduction zone science community as to what some of the primary areas of focus should be and to guide future NSF proposals to allow the develop of a community model.

I found the workshop to be very informative, and I met some great people that I look forward to being able to collaborate with in the future. The presentations and breakout discussions were fantastic, and I certainly feel motivated to pursue this field of science.