Update from the Arctic!

Hello again from the ! Now that we are headed back to Barrow and are subsequently south of 80 degrees, we have web access again (albeit, intermittently). A lot of you have been getting semi-regular updates via email of my adventures while at sea, but I thought I would summarize some of the highlights for the blog:

I saw my first set of polar bear tracks today! Actually, I saw two. At least one of them was fairly fresh because you could still see detail (e.g. the individual pad marks) in each print. I think I heard a ring seal today as well. I did not see it, but I heard it bark. There are also bearded seals up here, but apparently they are of the non-barking seal variety.

I also saw an icebow, which is essentially a rainbow that forms over ice. The colors are very faint and for the most part the icebow is all white. Now some folks out here have said the icebows are really fogbows, since although they start and end over the ice, the main body is in the fog. Fogbows can form wherever there is fog though, and are not constrained to the ice. Whatever it is, they are pretty cool!

Today was simply amazing. Just after I got off shift we entered an area of pressure ridging, where two ice flows are pushed together. For you geo buffs, this is analogous to convergent margins. Sometimes both edges of the ice ride up and form ridges of ice and snow. Polar bears like to use these to perch on and look out over the land (probably for their next meal). Depending on the thickness and age of the two ice flows, one can override the other, just like in subduction zones. Pretty cool, eh?

The pressure ridges today were pretty vast and were surrounded by pools of aquamarine. As the ice gets old, it becomes compacted and less saline, turning more and more blue as it does so. We got stuck several times and had to back up and ram repeatedly. We finally broke through when they brought on a second engine. The Healy has four engines, 3 that can be used together if necessary and one that is always kept for emergencies only. Standing on the bow as Healy broke through the ice was an amazing experience. You could really hear the ice break and watch the crack propagate out in front of us. As ice is pushed down underneath the ship, the sound of it scrapping along the hull is tremendous. Luckily, the multibeam sonar and sub-bottom profiler are protected by ice windows!

Right now we are still in "drive-by-cursor" mode. Essentially we are just following the foot of the continental slope to see where it goes. Most continental margins are comprised of a continental shelf, slope, and rise. The foot of the slope is defined as the maximum change in slope where the slope and the rise meet. Up here in the the continental margin has no rise, and oceanic sediments pile directly up onto the slope. We can see this clearly using the sub-bottom profiler, which produces a low frequency sound wave that sweeps between 3.6 and 6 kHz. The low freq. sound is able to penetrate the seafloor and reflect off layers of sediment and underlying rock, giving us an image.

Still no polar sightings. Well, not by me anyway… The bridge has spotted a couple, and did a couple of the night watchstanders. I am keeping my fingers crossed.

Last night I managed to stay up and watch the sunset. Actually, it is more of a sun-"lowering" I suppose and really all it does is make a slight arc in the sky. We are at ~ 83 degrees North, so it never gets dark at all now. At the most, we get some shades of pink.

Dredging operations are slated to start on Friday and we hope to have our first ice buoy deployment sometime in the next couple of days. This will involve actually putting people on the ice (not me, unfortunately). There will be two watchstanders armed with rifles, one with the guys on the ice, and one on the boat, to look out for polar bears.

Still have not seen a polar bear. L Word has it that a number of bears have been seen just off the north Alaskan coast, so we are hopefully to spot more bears on our return to Barrow.

I SAW A POLAR BEAR!

At approximately 10 pm local time, a bear was spotted off our fantail. When I first ran outside I could not see him and I was crushed. The boat slowly started coming around to starboard and inching up to the ice. The encounter was amazing! We must have spent 15 or 20 minutes or so just watching as the bear walked around, sniffing the air and searching for food. At one point he stuck his nose in a hole in the ice and starting digging around. Eventually he crossed in front of our bow and walked off into the distance.


Here are some pics from my adventures. Once I have a better internet connection, I will post some more.


me on the bow of the Healy: 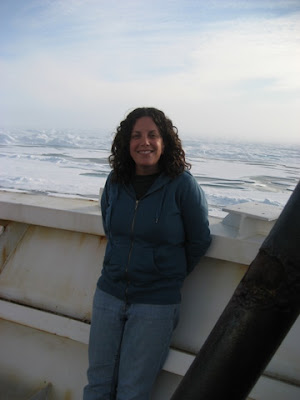 The sun and the bear (he's small, but he's there): 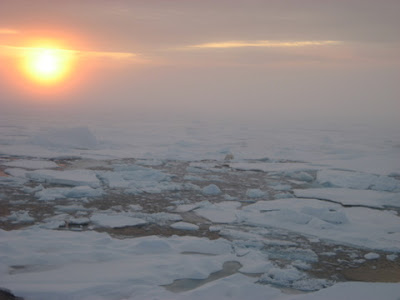 A picture of the bear taken with a camera much better than mine: 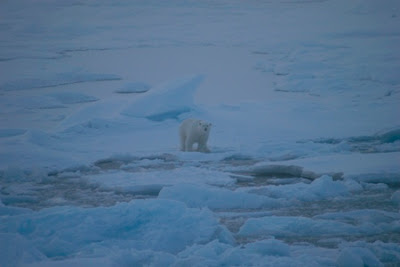