If you got my Healy emails, then you probably saw an example of what the foot of the continental slope looks like in the sub-bottom profiler image. I thought I would post the image here as well, because I just think it is so cool. I am still amazed sometimes at how far technology has come. I mean think about it. We are using sound to map what is beneath the seafloor. How cool is that??
Below is an image of the foot of the slope captured as we first passed over it on August 18 (click on it to get the full size image). You can see the layers of sediment pile up on the slope as it drops off. This is a raw image, so the numbers running vertically along the image are time in seconds, not depth. In a nutshell, depth is measured by recording the two-way travel time of the sound wave and multiplying it by the speed of sound through the water and sediment. This image also has a roughly 20x vertical exaggeration, so the slope looks a lot steeper than it really is. 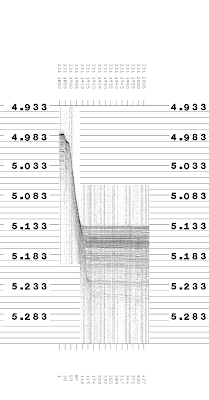