As one of my goals for 2016, I decided I want to expand my skills in the kitchen. I love baking, so why not find a way to challenge myself and make some tasty treats at the same time?

Enter the Ultimate Cake Baking Bucket List. The list, which assigns a cake to bake for each month of the year, is designed to introduce the baker to multiple techniques while also, making them more confident and comfortable behind the stove.

January's cake was a citrus angel food cake. I postponed making it until this weekend, as I thought it would be a fun activity to do while hiding out from the Super Bowl madness occurring just down the road from us (we're only 10 minutes from the stadium, and live right along the public rail line).
One thing I noticed about some of the recipes on Food & Wine is that they don't list out all the steps, which can be a bit confusing. For example, the recipe for the angel food cake lists heavy cream and powdered sugar in the ingredients list. The directions never mention these ingredients though. From the picture and the ingredients themselves, it's obvious they want to make a simple icing to drizzle on the cake, but it would be nice if they mentioned that.

I followed the recipe almost exactly as it appears on the webpage, with a couple exceptions:

This cake is light, airy, and very delicious. The zest and fresh lemon juice really give the cake a nice pop of citrus flavor without making it tart. I was honestly surprised just how flavorful this cake was, as plain angel cake is so mild and generally a bit boring on it's own.

I did have some trouble getting the cake off the bottom of the pan, until I started cutting it. I used a non-stick angel food pan, but since angel food batter climbs the walls of your pan as it bakes, I am not sure how much the non-stick coating actually helps. I need to get a nice rubber or silicon icing spreader that I can also use to separate the cake from the pan for easy removal. You'll notice in my pics that the cake was still on the bottom part of the pan when I iced it. 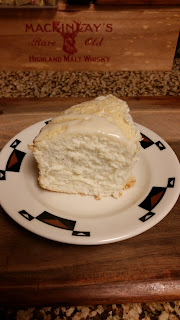 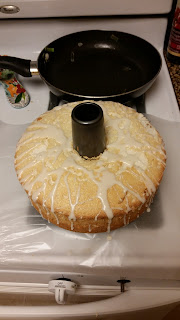 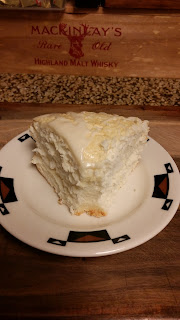 (sorry for the dirty pan in the pic, my husband had just sauteed some veggies)
Posted by Monica at 10:45 AM

Email ThisBlogThis!Share to TwitterShare to FacebookShare to Pinterest
Labels: baking