Kurt Schwehr, a research professor here at CCOM, has been doing a lot of Google Earth visualizations lately and his work is definitely getting noticed. Last year, Kurt was invited to Google to give a Google Tech Talk, and even more recently the folks over at Google asked Kurt to pick one of his visualizations to be highlighted in Google Earth's own blog and added to the extensive list of downloadable visualizations that anyone with the free Google Earth browser can view. Kurt picked his right whale one, which shows North Atlantic right whale sightings for 2009. The Google Earth blog also mentions Kurt's Healy visualization, which tracks the USCG's icebreaker Healy as she makes her way around the Arctic. The positions are updated every hour, along with a new photo captured from Healy's aloftconn camera.
It is really cool to see the kind of data that can be viewed in Google Earth. Not only does GE provide a free way to view geo-referenced data, it does so relatively easily. That is key. Even if you have a GIS software, getting some nice chart images, or world maps or images, properly referenced behind your data is not always a straightforward task. In Google Earth, the spatial context is already there, in the form of an interactive, easy-to-manipulate globe.

Here is a screen shot of Kurt's right whale visualization in Google Earth: 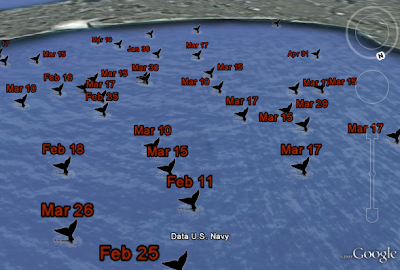